Tips Facebook Changes its Name to “Meta”, Here is Everything You Need to Know

JOIN OUR TELEGRAM CHANNEL NOW
Click to join
Click to join our WhatsApp group
Whatsapp group
Facebook on Thursday announced that it has changed its company name to Meta.


The name change, which was announced at the Facebook Connect augmented and virtual reality conference, reflects the company’s growing ambitions beyond social media. 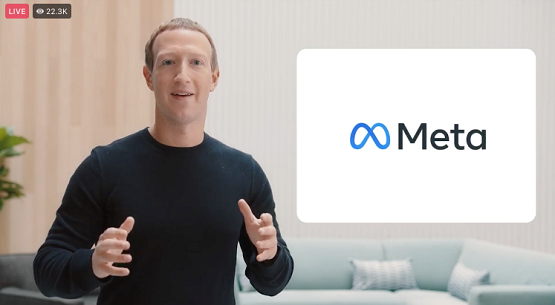 The re-branding also comes after the company has dealt with a barrage of news reports over the past month stemming from whistleblower Frances Haugen’s trove of internal documents.

“I’ve been thinking a lot about our identity as we begin this next chapter. Facebook is one of the most used products in the history of the world,” Zuckerberg said on Thursday. “It is an iconic social media brand, but increasingly it just doesn’t encompass everything that we do.


“Today we’re seen as a social media company,” he added, “but in our DNA, we are a company that builds technology to connect people. And the metaverse is the next frontier just like social networking was when we got started.”

Zuckerberg, who said he loved studying classics in school, said the name was inspired by the Greek word meta, which means “beyond.” “For me, it symbolizes that there is always more to build.”

Zuckerberg owns the Twitter handle @meta (whose tweets are protected as of this writing) and meta.com, which now redirects to a welcome page on Facebook outlining the changes. The site previously redirected to meta.org, a biomedical research discovery tool that was a project of the Chan Zuckerberg Science Initiative.

The company also replaced its corporate sign, which featured a picture of a “thumbs up,” outside of its California, headquarters with one touting its new logo: a blue infinity sign.

You can read more about the Facebook name change here.
JOIN OUR TELEGRAM CHANNEL NOW
Click to join
T

my friends from work and I have been hoping about. This kind of information here on the website is excellent and helpful and is going to assist my wife and I in our studies several times a week. It appears as if this network has a lot of info concerning subjects on the site and other subjects and types of info definitely show it. I'm not usually browsing websites during the night but when I have some time I am usually avidly hunting for this sort of information or stuff closely concerning it. When anyone gets a chance, have a look at my site. [color=#000_url]writing nih grant proposal near Charlottesville, Virginia, United States city[/color]
H

Wedding photography has for a long time delegated a fulfilling cornerstone in our regimen. As a teenager anyone could find me holding a thirty five mm film camera in hand taking keepsakes of my best childhood and favorite subjects, and the beautiful land inhabiting the small seaport town in the north Virginia bay front where my mother and I grew up. This thing my childhood friend taught me blossomed to a fine skill of a master that I pursued, scanning editorial pictures, paintings and clothing photoshoots in my 20's. After, I initiated paving a highly sought photography career plan in which remarkable changes and enriching influences had already started to take shape and become visible about my body of work. This day I continue to be a continually in demand and nominated Seattle Based Wedding popular photographer and can be found in all around Washington as well as all of Washington. I am also a booked Seattle WA real estate Photographer. If you get a chance have a look at my new site in order to learn some more about my work: [color=#000_url]Seattle Commercial Photographer[/color]
You must log in or register to reply here.
Share:
Facebook Twitter Reddit Pinterest Tumblr WhatsApp Email Link
Top